Steven Blockmans
Head, Europe in the World programme, CEPS, Brussels
Steven Blockmans is Head of the Europe in the World programme at the Centre for European Policy Research (CEPS), a Brussels-based thinktank, and Professor of EU External Relations Law and Governance at the University of Amsterdam. He is the author of Tough Love: the EU’s Relations with the Western Balkans (Asser Press, 2007) and The Obsolescence of the European Neighbourhood Policy (Rowman & Littlefield, 2017) in addition to having published widely on the EU’s integrated approach to external action. He served as the Leading Rapporteur of task forces on ‘More Union in European Defence’ chaired by Javier Solana (2015) and ‘Regroup and Reform: Ideas for a More Responsive and Effective European Union’ (2017). Steven is a frequent media commentator and regularly advises governments of countries in wider Europe and in Asia on their relations with the EU. Before joining CEPS in 2012, he was Head of Research at the Asser Institute, an international law centre based in The Hague. From 2010 to 2014, he was a special visiting professor at the Law Faculty of the University of Leuven. Steven holds a PhD in International Law from Leiden University.
read more

Loes Debuysere
Researcher, Foreign Policy Unit, CEPS, Brussels
Loes Debuysere is a Researcher in the Foreign Policy Unit of the Centre for European Policy Research (CEPS), a Brussels-based thinktank. Her expertise and publications are situated at the intersections of conflict studies, democratisation theories and gender politics. She has worked extensively on the EU’s integrated approach to external conflict and crisis, for example as a Researcher in a H2020 project on the EU’s conflict sensitivity in external crisis response. Loes was previously a Schuman Trainee at the DG for External Policies of the European Parliament and holds a PhD in Conflict and Development Studies from the University of Ghent.
read more
WGA widely accepted
The country reports and the surveys on which they are based underline that almost all member states have accepted that having a WGA is necessary if one wishes to tackle new and complex security challenges. Indeed, most EU member states have made either explicit or implicit policy commitments to a WGA to external conflict and crisis (cf. Figure 1).
In almost two-thirds of the member states (64%), there are governmental documents that specifically address the concept of a WGA in external crisis management. In these countries, either one core WGA document (e.g. in Belgium, Denmark and the Netherlands) or a number of more sector-specific WGA policies (e.g. in Germany and Sweden) exist. Countries without an explicit WGA document (32%) generally have other policy documents (e.g. national security strategies) that contain one or more references to comprehensive action in the realm of external conflict and crisis.
Figure 1 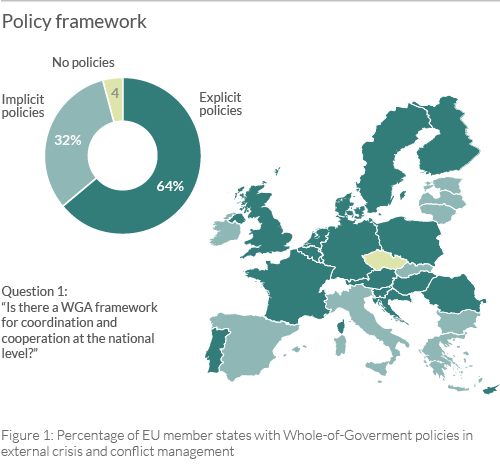 Pioneers and
late-comers
National WGA documents have come into being at very different moments in time over the past two decades. Denmark, the UK and the Netherlands can be identified as pioneers in terms of developing an integrated or comprehensive approach to external crisis management, as they adopted a WGA policy as early as the 2000s in the wake of the 1992 publication of UN Secretary-General Boutros Boutros Ghali’s ‘An Agenda for Peace’ report and the peacebuilding debate at the level of the United Nations.
Some other countries, such as Belgium and Croatia, have only adopted a WGA in recent years. In these latter countries, the 2016 EU Global Strategy (EUGS) served as an important source of inspiration for drafting a national WGA policy. In addition to the EUGS, WGA documents and practices of intergovernmental organisations have generally provided much inspiration to EU member states to adopt a WGA. For example, the UN’s 2030 Agenda for Sustainable Development (e.g. in Belgium, Finland, Greece, Luxembourg and Poland), the guidelines of the OECD’s Development Assistance Committee (OECD-DAC) (e.g. in Austria, Finland, France and Poland), or NATO’s operational planning in Afghanistan (e.g. in Austria, the Czech Republic, Germany, Italy and Spain) have been of particular importance in spurring on the drafting of national WGAs to external conflict.
Table 1

WGA scope varies widely
Overall, when taking into account both explicit and implicit commitments of all EU member states, the scope of WGA policies varies widely (cf. Table 1). While a relatively small group of member states have committed themselves to a narrow WGA (i.e. one that principally pushes for civilian-military coordination in conflict response and resolution), other countries seek to coordinate a wider approach combining the so-called three D’s: development, defence and diplomacy. Increasingly, the latter is being expanded to a system-wide approach that encompasses all dimensions relevant to conflict management, including trade, justice and internal affairs. This is in line with the EU’s multidimensional ‘integrated approach’ to external crisis and conflict as outlined in the 2016 EUGS. An interesting finding is that bigger and more populous member states do not automatically adopt a system-wide approach to external conflict and crisis. For example, the WGA policies of Spain and France have a more limited scope.
Caveats
A number of caveats should be taken into account when assessing the data in Table 1. First, many member states with a relatively narrow WGA policy at the national level do take part in comprehensive WGA missions organised by the EU or other intergovernmental organisations. Indeed, a lack of national resources for external conflict management is often remedied by active support and involvement in, for example, CSDP missions. Moreover, adopting a system-wide approach on paper does not necessarily mean operationalising a system-wide approach in practice. Paper commitments are often more ambitious than actual WGA implementation at the headquarters level What’s more, the scope of a WGA may shift from narrow to system-wide depending on the nature of the specific crisis or conflict that is being addressed by the member state.
Focus on neigh-
bours in smaller
countries

When looking into the geographical focus that member states adopt in their WGA policies, small to medium-sized countries (e.g. Croatia, Cyprus, Greece, Latvia, Lithuania, Malta and Romania) generally focus their WGA-related attention on neighbouring countries and regions that may pose a direct threat or lead to negative spillover on the domestic level. Similarly, the thematic focus of these countries’ WGAs is often in line with the specific type of ‘threats’ they face (e.g. maritime crises for Cyprus and Malta, migration flows for Slovakia and Slovenia, or hybrid threats for the Baltic states). On the other hand, the WGA remit of the above-mentioned ‘pioneering’ and bigger EU member states tends to extend worldwide, with African, Pacific and Caribbean countries often figuring as priority areas for former colonial powers (e.g. France, Italy and the UK). These WGAs often encompass actions related to the whole conflict cycle, ranging from prevention to stabilisation to peacebuilding. Where they do exist, WGA documents are generally considered of high quality and a matter of good governance. However, most country experts identified the actual paper-to-praxis transition of these WGAs as a crucial challenge, with many member states lacking concrete and binding guidelines on how to implement and enforce WGA policies. The next sections look into how WGA policies are operationalised at the headquarters level.
Back to Top